Lapilli – Voices and sounds from the island 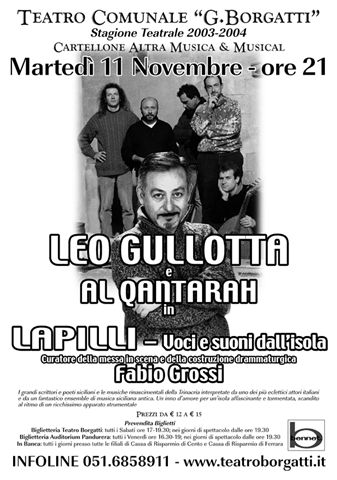 Lapilli was born from the encounter between a Sicilian actor, Leo Gullotta, and an ensemble of ancient Sicilian music, Al Qantarah. It’s a poetic-musical journey from Federico II and Cielo D’Alcamo, through Tomasi of Lampedusa, the corrosive force of Buttitta’s verses, until the overwhelming prose of Andrea Camilleri. Lapilli is a hymn of love for a fascinating and tormented island, marked by the rhythm of a rich instrumental apparatus.

The Al Qantarah group (Arabic “bridge”) has for some time performed a careful musical research, centered on medieval Sicily. The end result, as one can listen in the concerts that the group has been doing for over a decade around the world, is an attempt to recognify a multifaceted and multiethnic Sicily, which in fact survives to this day.

Precisely by this conviction, in pursuing what was defined the Sicilian Poetry School, which had its origins from the courthouse of the Norman emperor who ruled as an illuminated politician and patron, with representative figures such as Cielo D’Alcamo, Giacomo da Lentini and Federico II himself, here represented by his poem “Dolce lo mio drudo”, we are driven into this reconnaissance through Sicilian literary production, up to Camilleri. To do this, we could not avoid seeing the writings by Giuseppe Tomasi di Lampedusa, who in his Gattopardo painted with great mastery the Sicilian souls. This trip ends with the last great Sicilian poet: Ignazio Buttitta, who with his caustic and proud lyric, defines the work of his people, without saving praise and disapproval of his land.

The presence of Andrea Camilleri, in this wandering among the languages ​​of this island which gave so much to fantasy and literary creativity, is represented by two passages of great irony and intelligence, drawn from “La scomparsa di Patò” and “La concessione del telefono”.

It’s a literary path which uses an evocative force offered through a splendid reading, of which Leo Gullotta is interpreter. His precious contribution extends the horizons of the original project and gives life to a true poetic-musical journey, in a synergic game that combines all over the suggestions of the word and the power of the song, musically performed by a rich instrumental apparatus.

The image of the show collects synthetically every bucolic and rustic thing that imagination gives us. This choice was determined by the extreme will to use simply words and sounds that, by virtue of their value, assume literary greatness.

The alchemical collaboration between Gullotta and the Al Qantarah offers an image of Sicily, a land that is always alive and curious, as the Lapilli are, who come out of Etna with force: the mother mountain and the mistress of an overflowing island of Love and Contradictions.