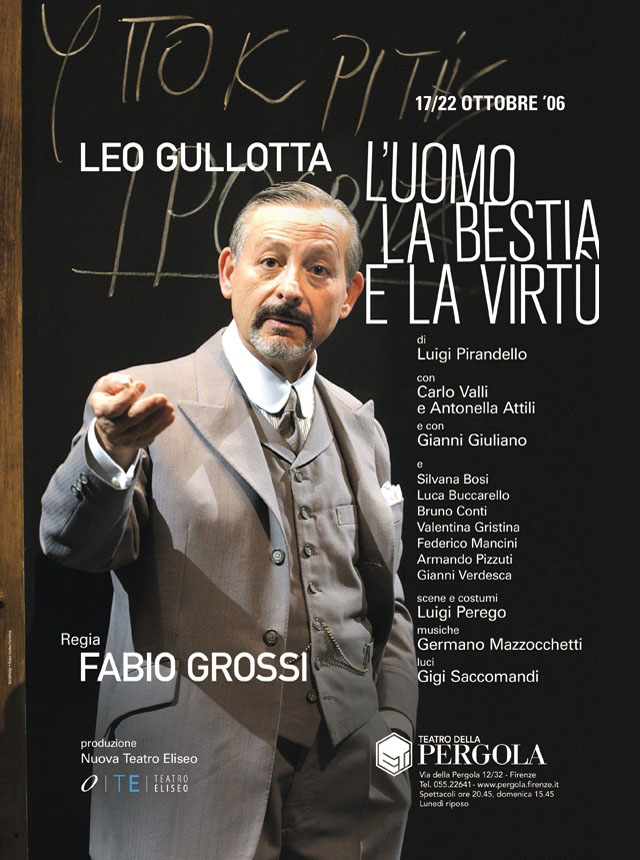 After many years of consideration, I came to tell, on the tables of a stage, this play by Pirandello, of which I will speak later.

For many years, many attentive evaluations, many memories have become more and more close to this performance: the interpretive qualities of an actor like Leo Gullotta, the great protagonist of our scenes, suitable for the facets of the character born of the pen of the great author from Agrigento, gave me the opportunity, also offered by the direction of the Teatro Eliseo, to stage the Man, Beast and Virtue.

It is “a tragedy drowned in a farce”, which on the one hand is well-versed in the theater of the end of the century and its mechanisms (the betrayal, the enfant-terrible, the superficial respect of the conventions that is resolved in cynicism, the constantly interrupted lunches), but on the other hand, it can correct the abstraction of pure mechanics. And then the tragedy, drowned in this already clever game. A tragedy that brings the resonances of the Pirandellian word: conflict between being and acting, and also, in the end, a quick and comical game of the parties.

I created everything in my vision between said and not said, between whispering and cackling, between the appropriate and the unsuitable, coming to exploit the folklore of tradition, to represent the metaphor of appearing in order to be, in a grotesquely dramatic moment, in the presentation of the mask of Virtue.

Man is the “transparent” Professor Paolino, a person suffering from the hypocrisy of the world, of “civilization”: to be well-educated means to be just “comedians” – he would like a world of relationships expressed in their reality, in opposition with every false convention. But we shall see immediately how this little man is forced to behave in a diametrically opposed way: all his connections, which he would like sincere and real, become polluted and false, in order to save the only relationship he feels real and true, even if he doesn’t admit it, because it touches the sphere of feelings. Friendship with the doctor is instrumentalized, the pharmacist’s spilorerie paid, and the hate for the Beast, the Captain, turns into deference and flattery. All this in order to save the relationship he holds with the Virtue, Mrs. Perella: or rather, to save the face of this beloved lady.

It is no coincidence that Pirandello makes our protagonist say: “Gobble, Paolino, gobble it”.

With these words Man makes us understand, but never tells, to love her, the Virtue, and refers to the pity he has for her. But in the second act, this pronounced piety is transformed into exerted violence. Paolino does not know himself very well, and is “double” also towards himself, his feelings, and the libidinous suffering he feels in “preparing the Virtue, God, to appear in front of the Beast”. Moreover, Paolino does not know the object of his love at all: what is “purity” for him is nothing but hypocrisy and instrumentalization of the male, by the appearance of the disguised woman: angel or whore.

As a romance by Tosti sings “… the dawn separates the light from the shadows …”, in the end, at the dawn of our temporal path, it will be precisely the Beast, the captain, the seemingly superficial character, to invoke the truth. Never a causal word in the pirandellian context. And this truth, which he somehow subdued, he will ask Paolino who, provoked by the Beast to reveal himself to others and above all to himself, launches into a hypocritical and tragic self-defense, ready to finally kill. But at that moment his illusion, or better the illusion of his feelings, collapses: Virtue appears in its true aspect.

What he called Love is called with its real name: Carnality.